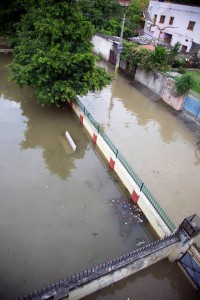 View of the street from the FairMail office

Every year from June to September the heavy monsoon rains fall on India’s dry soil. This is vital for the rain fed agriculture. However this year intense rains have caused the worst flooding in the past 10 years. The situation got so bad that even the FairMail office got surrounded by the rising water and had to be evacuated.

The FairMail office is situated in Nagwa, in the pilgrim city of Varanasi on the borders of the holy Ganges river. The river had to carry so much rain water that the river left its borders. This happens every year during the monsoon. But this year the amount of water was so much that the water flooded parts of Nagwa too. First the water entered the houses of a few of our teenage photographers and their families. 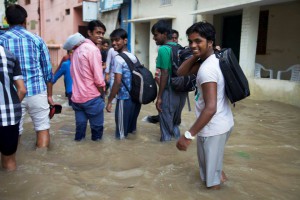 FairMail teenagers helping to evacuate the volunteer from the FairMail office

The water just kept rising until also the streets around the FairMail office where flooded. There was no other option then to evacuate the FairMail office and look for another temporary housing option for our volunteer and to suspend the free photography classes until the office would be accessible again.

We were very lucky that the FairMail office is on the third story. Four of our teenagers were less lucky as they had to move themselves and their belongings to the roofs of their houses. Instead of being desperate their reaction was more calm. “You just have to manage it” is mostly their reply when the going gets tough. 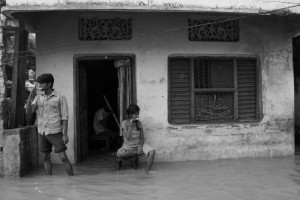 FairMail teenager Anil Rao in front of his house

Like with FairMail teenagers Anil Rao who is brushing his teeth up to his knees in the water running through the street in front of his house.  There is perhaps a lot of wisdom in their reaction. Because in the end it all comes down to how you handle a situation and can manage with the means you do have available.  Like this man on a rikshaw below. 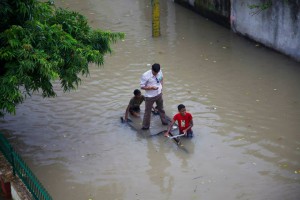 You have to manage it