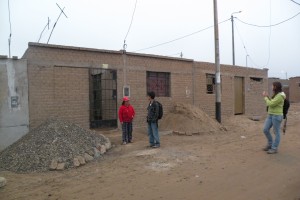 Also looking very new is the house of ex-FairMail Peru photographer Elmer Machuca Chacon. When he turned 19 last year he not only left FairMail, but also the Mundo de Ninos boys home for ex-street children and moved back into his mother’s house in El Alto in Trujillo. The house he had left when he was 11 years old to roam on the streets (click here for the video about Elmer’s life back then).

El Alto is a new part of the city of Trujillo, lying on the sandy outskirts overlooking the city. Many of the newcomers to the city, looking for work they can’t find in the rural areas, squat a piece of land here to build their new home. Like Elmer’s mother 10 years ago. With a lot of poverty and little social cohesion El Alto is a dangerous part of Trujillo which Elmer himself encountered when he was robbed last January. 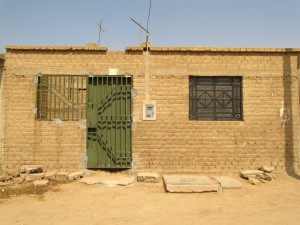 To make sure he and his family are at least safe inside their house Elmer used part of his FairMail earnings to remodels his mother’s house. He bought new strong iron doors, barred windows and new locks. While installing the metal work in the walls of the house they re-did the front façade of the house in one go, giving it a fresh new look. Of the 50% profit that the teenagers earn they can spend a maximum of 25% to improve their family housing, this way giving their family a short term benefit too of their children’s participation in FairMail. 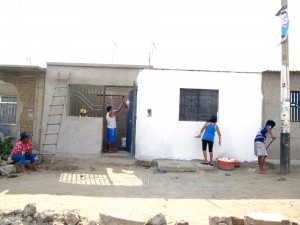 His family is very thankful for Elmer’s support, especially after his difficult youth. Mrs. Eva Maria, his mother, is very proud of her son and the results he is booking and thankful to the people who bought her son’s cards and pictures.

View the video made about Elmer’s life before he got into FairMail below: