Indian teenagers invest over 100.000 rupees in their housing 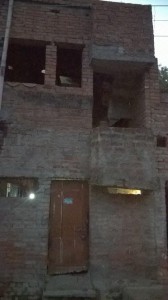 Despite the very sad news about FairMail India closing its doors in October 2014, we are happy that the sale of the Indian FairMail cards is still having a positive impact on the teenagers and their families. In the last few months of 2014 five of the teenagers invested more than 100.000 rupees (>1.500 euro) in the construction of their family homes.

For example 17 year old Aradhana started the construction of her families own house in the outskirts of Varanasi which means they will no longer have to pay rent from her father’s small wage as cart puller. Kaushal managed to provide his family with an improved second story of their home. Meanwhile Sandhya invested in fully replacing the tiny room she lived in with her entire family for a new 2 story house. Anil Kumar and Anil Rao also managed to make significant improvements to their homes and to provide due maintenance. In the case of Anil Rao allowing his family to earn more money renting out part of their home to other people.

We are very happy with this tiny bit of good news after the difficult decision to close down FairMail India. Unfortunately our decision still seems like the least bad decision to take as tension between some of the former teenager’s families still persists. Also our former team member is still being held in jail since July 2014 on accusations which still haven’t been investigated properly. A very sad situation which seems increasingly difficult to influence despite our intents.