We are very proud of Maria flor from FairMail Peru. Here she is with three of her friend with whom she finished pre-university year. 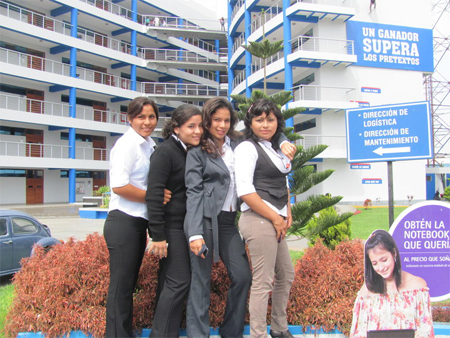 In January 2011 she will start her 4 year course in communication sciences. This acheivement didn’t come easily at all for Maria flor. With her family she is living next to the Trujillo prison where she ended up when she moved to the big city with her mother. Jobs weren’t easy to come by, so like many of the inhabitants of the “El Milagro” slum (which means the miracle in Spanish!) she ended up working on the garbage belt. With the collection of paper, tin, iron and glass they managed to earn just enough to get by. By now her mother had a new man. He and Mariaflor didn’t get along wel, but two brothers and a sister followed. With the help of ACJ (a community centre in El Milagro) and later FairMail she managed to finish secondary school last year.

Because the education tought at the public school in El Milagro is of low quality had to prepare herself last year before being able to aply for the prestigous Cesar Vallejo university in Trujillo. She also succeded in that. The only problem was she hadn’t earned enough money yet with her photography for FairMail to start. That’s why the last months she has been working as a waitress in the same restaurant her mother is working as a cook. Despite the horrible situation at home (her father can’t keep his hands to himself), Maria flor is determined to give her family better oppertunities then the ones she had. That is why we are so proud of her breaking the  circle of poverty! Of course we will be in touch with Maria flor and monitoring her university results.

Want to read more about Mariaflor, check her pictures or send her an e-mail to congratulate  her? Then click here.