The photo that changed a life

FairMail’s goal is to impact teenager’s lives through the art of photography. Never before though did just one photograph have such a big impact on the life of a teenager as with this photo taken by FairMail Peru photographer Yomira (17). In November her photo was selected by a big Dutch college for their corporate Christmas cards. Five months later the full impact on Yomira’s life becomes clear. She is now on her way to be the first in her family to go to university.

Until November Yomira’s perspectives weren’t very bright. Although she had managed to finish her high school with the help of her FairMail earnings she was running short to be able to finance her dream of studying business administration. Also she had serious problems at home and with her boyfriend. We were quite worried about Yomira’s situation and if she would be strong enough to stay on the right path. 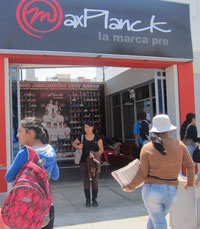 Yomira in front of her pre-university institute

Things changed when FairMail’s profit results for the 4th quarter were announced. She had earned the record amount of 4.500 soles (1.200 euro), mainly due to the sale of her picture on ROC Aventus College’s corporate Christmas card. Suddenly she had enough money to prepare herself for the university admission exam at one of the best private training institutes. Preparing for university admission in a private institute is essential in Peru as the level of public high school education is not sufficient. Plus the entry exams are very competitive with only 5% of the applicants being admitted for some courses.

From dream to reality

Yomira seems to be quite happy studying at the institute. It is a totally different world than Peru’s public schools as the teachers use better teaching methods, are more patient and are able to explain more about the subjects, according to Yomira. But it is also quite exciting as now, after talking and dreaming about it for years, she is at the point of taking action to make her dream turn into reality. But what a great opportunity it is to become the first in her family to continue studying after finishing high school. Not many teenagers in her surrounding have that opportunity!

Still it is a big challenge for Yomira. She was a bit scared about how difficult and competitive it would be. She is expected to study 45 hours per week at the institute and has about 4 hours of homework per day! It is also difficult for her that she doesn’t know anybody as none of her high school friends were able to go with her. She says she still doesn’t have much new friends but she enjoys learning new things and achieve her goals this way. 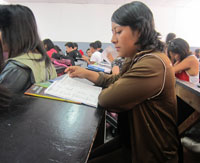 Yomira studying at her new institute

Preparing herself for the university admission exam costs about 2.000 soles (about 550 euro). In September she hopes to be ready for the entry exam for the UNT (National University of Trujillo) to study accountancy. The battle will be tough though with about 400 candidates for only 30 seats. Even if she doesn’t make it in the first go she is determined to keep trying and give it a second shot if necessary.

Yomira wishes to thank all the people who bought her pictures and cards. And adds that if anyone has any tips or suggestions about the kind of photos they would like to see on FairMail cards,to please let her know.

The picture that changed her life is also available on a normal FairMail card and a best seller in Germany. Want to stock up on your Christmas cards early this year, then order here?

In this short video Yomira presents herself: